Announcing my Newest Release: 'The Awakening of Celeste' 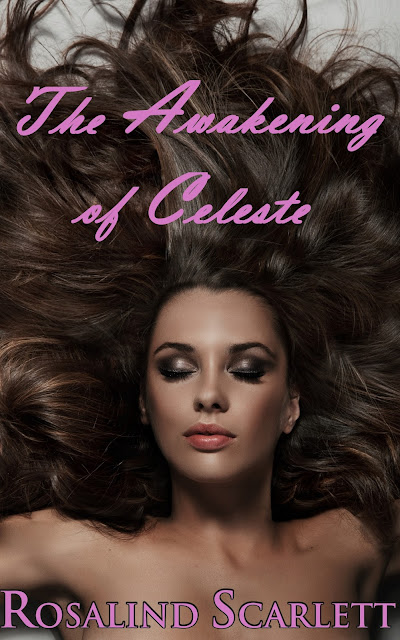 “I never fathomed I would know such immense pleasure as he has shown me.  I might even be happy, if only I can acclimate to this way of life.”

While dreaming of returning home to receive the expected proposal of Mathieu, sixteen year old Celeste is instead sold to a procurer for the Sultan by her parents while on holiday to Rabat, Morocco from Paris, France.
She is scared and very angry.  The other harem women dote on her and prepare her to be presented to the Sultan, instructing her on the ways of love.   Her encounter with him is better than she feared and he makes love to her gently, introducing her to her first pleasures of the flesh, holding her in his arms the duration of the night.
In the afterglow of passion, Celeste begins to think perhaps her life will not be so bad.  She thinks she has never felt so loved, so alive.   He continues to call for her several days in a row.  Her feelings escalate and she believes she is truly in love for the first time.
Then one day she is called into the Sultan’s chamber, along with two other women and expected to perform with them.  Disgusted and confused, Celeste must watch him pleasure and be pleasured by the other women, as well as participate if she wishes to remain in his favor.
When she becomes pregnant, he seems overjoyed, and she is delighted to be able to give him a child.  But will Celeste be able to continue to please him or will her jealousy get the better of her?  Will she ever truly adapt to life as a harem wife?

Or Enter the Giveaway below to Win a Copy!

Excerpt for 'The Awakening of Celeste'

Before I knew it, the time for the ceremony was upon me.  The butterflies which had settled in my belly now commenced to fluttering all about in an insane flurry.

Katira gave me a kiss upon the cheek.  “You are gorgeous, Celeste!  The Sultan will be beside himself at the sight of you.”  The mention of the sultan elicited a glower from me.  “Do not fret, child, you will do just splendidly!”   I smiled at her, having come to value her kind words of encouragement, even if I did not believe them myself.

To my surprise, I was brought outside to where an enormous elephant stood, also elabourately decked out in coloured silks.  There was a platform of steps beside him which I was expected to ascend to climb atop his back.  Which did nothing to help my nerves, to say the least!  I had scarcely even ridden upon the backs of horses back home, and this creature was at least twice the size of any horse I had ever seen!

Somehow through my trembling, I managed to get myself on the back of this beast.  And then it began to walk.  The absolutely foreign large motion of it was jolting my belly, quite upsetting the swarm of butterflies which had taken up seeming permanent residence there within.

So it was perched upon the back of this animal that I made my entrance from the palace egress into the garden of the courtyard where the wedding was to take place.

The women marched in a procession in front of me.  All eyes were on me up on this great beast as we strode in.  I felt I might lose consciousness, so overwhelming it all was.

And then I saw him.

Yet there was no long beard, no grey hair, no wrinkles.  He stood at the end of the long path his lower body adorned in a white silk wrap, leaving his sculpted chest bare.  And even with the white silk turban which concealed his hair, I could easily discern it was not grey.  He did sport a beard, though it was dark and trimmed neatly enough to compliment his chiseled features rather than hiding them.

No, it could not be him.  He is too young.  Surely he must be the son of the Sultan.  But then why else would he be standing front and center?  I do not see anyone else who appears to be the groom.  He is the most extravagantly dressed one.

When I was approximately ten metres from the altar— and him— I was assisted down from the elephant, which was not without some difficulty considering the layers of fabric in my gown.  I took a deep breath and proceeded to follow the women towards the altar.

As I took in the sight of him, I could hardly believe my eyes.   He was tall, well-built, the sun glinting off the well-defined muscles of his torso.  As I drew ever nearer, I saw his eyes were a light brown, expressive, gentle.  His features were regal, his mouth full.  The thought of him kissing me with those lips invited itself into my mind, swiftly followed by the musing of that mouth elsewhere on me.   He was by far the most striking man I had ever laid eyes on.  Actually, I did not even believe he was even a man.

I decided this must be a pleasant dream I was having the night before the wedding.

Shazeb appeared just as taken with me as I was with him, making me blush.  His eyes raked over me appreciatively.  By the time they had settled on my face, I could not miss the hunger in them.  He lifted his eyes to meet mine and suddenly I felt weak in the knees.  Even Mathieu had never elicited such a reaction in me!  I promptly pushed the thought of Mathieu from my mind, as it would serve no purpose.  That life was far behind me now.   Shazeb appeared powerful, passionate, yet tender.

Suddenly, the idea of it all was not so repulsive.

Never taking my eyes from him, nor his from mine, I reached the altar.  He held his hand out to me.  I placed mine within it and instantly my whole body set to tingling.   A soft smile formed upon his face and I thought I would melt right there, it affected me so.  If I had been fool enough to not grasp how handsome he was before, I would have unquestionably upon receiving his smile.

The man at the head of the altar began reciting some words in Arabic, though had they been in French, I would not have heard any of them, so rapt in his gaze was I.  All the while, he held my hands within his, gazing into my very soul, it seemed, which felt much more ceremonial than any words in any language some prominent individual could possibly utter.   And then he was leaning in, and his lips were upon mine.  The sparks radiated through me straight to my core.  It was so powerful, I had to hold back a gasp.

With this soft kiss, he drew back, whispering in my ear as he brushed past, “So Beautiful.”   I looked up to his face to see that amazing smile upon his mouth again, as he gazed upon me once more.

My groin ached the more I gazed at him.  Heat washed through me as I realised I would be his shortly, taking this man into my body for the first time.   And I welcomed it.

If those women were able to show me such pleasure when I did not even necessarily desire it from them, what kind of pleasures would he be able to show me, when my body was calling out to him as it was?